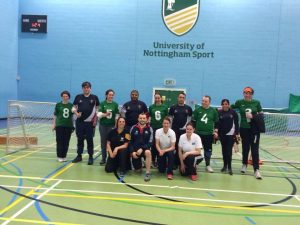 Despite only being separated by 2.5 miles and with no love lost between the two sides, the game was contested in the right spirit by the nine goalballers that took to the court throughout the match.

It was a close encounter in the early exchanges with some fantastic goalball being played at both ends of the court. However, as the game went on into the latter stages, Nottingham Trent University got the upper hand and built up an unassailable lead over their local rivals. In the end, the team from the centre of the city triumphed 17-10 over the University of Nottingham.

All players received trophies for their efforts with Sarah Stephenson-Hunter, whose inspirational story is going to be told in our next 10-year anniversary article, claiming the prize for best female player.