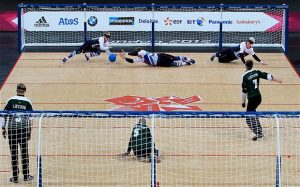 This September we were set to celebrate the return of the Paralympics. Despite it being postponed for 12 months, it’s the perfect time to revisit the amazing scenes from London 2012.

Going into London 2012, there were many question marks surrounding both of the goalball Great Britain squads and if they would even be able to participate at the biggest competition for our sport on home soil.

This rollercoaster of emotions leading up to London 2012 can be read about in our recent article with former CEO Mike Reilly.

However, despite these doubts, both the men’s and women’s squads did the goalball family and the entire nation proud!

The men got their first ever point at this level, drawing 3-3 with Sweden. They also played a fantastic game against Finland, who would go on to claim gold, finding the net on three occasions and rattling the woodwork four times.

The women registered incredible wins against Brazil, taking down the samba superstars 3-1, and then defeated the European Champions Denmark in a dominant 5-0 win. These sensational results meant that the team progressed to the knock-out stages coming second in the group, only behind the World Champions at the time China. 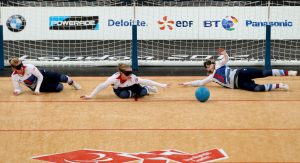 Like many Great British sporting stories there is always a degree of heartache and ours is no different. The quarter final game against Sweden ended in extra-time with a golden goal.

The disappointment of that defeat was short lived as these performances were the catalyst for one of the greatest boosts in awareness and growth goalball in the UK has ever seen.  Alongside gaining influential admirers of our sport, from royalty to Seb Coe, the platform that the Paralympics gave goalball helped inspire a new generation of players with ambitions to take to the court on the world’s biggest stages.

When the Paralympics came to London it completely gripped the nation, created a phenomenal change and was an unbelievable celebration of lesser known sports like goalball. It gave more people than ever in the UK an understanding about these sports and the incredible athletes that push their bodies to the limit to reach these heights.

As always, we would love to hear your memories of London 2012 or any other major event you supported goalball at since 1978.

Whether you were playing, coaching, officiating, or just in the crowd, head over to our ‘celebrating our history’ page to tell your story and get involved with our Hall of Fame: https://goalballuk.com/celebrating-our-history/