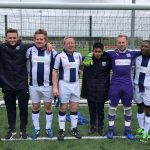 Each Thursday we want to put the spotlight on a person involved with goalball – from players, officials, coaches, or anyone

This week we caught up with Mark Turnham!

I play for Mersey Sharks in the Intermediate League and Birmingham in the Elite League. 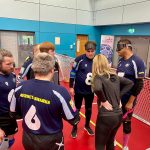 Back in 1996 when I was at college in Loughborough, a former player and Great Britain international called Barrie Lane also attended the college. He introduced a few of us to the sport and we competed as Loughborough. Later I joined him to form West Midlands. I then left the sport, in around 2007, to focus on cricket. I decided to make a comeback in 2020, playing my first tournament in 13 years for Mersey Sharks at the Intermediate Trophy. Realising I still wasn’t too bad at the sport, I also joined Birmingham to play in their Elite team. 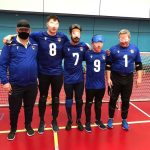 Is there a particular song, artist or genre that you listen to before a tournament to get in the mood? Or anything you’re loving at the moment?
Before any tournament, whether it is goalball or any other sport, I tend to go towards rock or hard rock, but generally, my music tastes are quite wide-ranging, as long as it is not rap or R&B.

I don’t like to be rushed so I like to be early to build up towards the game. I also like to warm my shoulders up with a series of exercises with a theraband before each game.

As long as meat is involved, I’ll eat anything!

No one in particular, but what I will say is anyone who is committed to representing Great Britain gets my vote.

My main sport is blind cricket – I am currently on the England squad. I also play blind football in the national league. I enjoy listening to audiobooks mainly in the crime and thriller genre. I am also a supporter of Chelsea Football Club and do try to go to a few games a season. 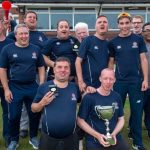 My wife and I have 3 main ideas on our bucket list:

We just need our daughters to leave home so we can afford it – just a few years to go!!!