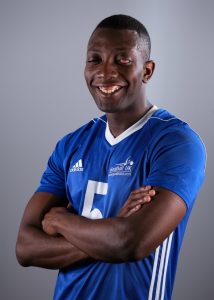 This month at Goalball UK, we are celebrating Black History Month by catching up with goalballers to speak about their black sporting idols – from trailblazers on the pitch, to those that use their platform to fight for equality. Today Caleb Nanevie tells us why Thierry Henry and Usain Bolt were both such an inspiration to him…

My first introduction to goalball was when I was 16 years old studying at the Royal National College for the Blind (RNC). There was a recreational session on a Friday afternoon which I was dragged into by a friend. I was more into football and athletics at the time and I had never played goalball, but I found it really fun and felt like it was more of the sport for me. I continually participated in goalball and was invited to a Great Britain goalball training camp in 2015 which is where I fully committed to the sport. Since then I have never looked back! Fast forward to 2020, I play regularly for Great Britain as well as Northern Allstars in the Elite National League tournaments.

I loved watching both Thierry Henry and Usain Bolt which thinking about it brings me back to why I used to enjoy playing football and participating in athletics. They are both sports I enjoy watching nowadays, with a unique interest across both track and field events in athletics!

What is it about Thierry Henry and Usain Bolt that makes them the ultimate inspiration for you?

They both consistently competed at such a high level even for a professional sports person which is something I try to replicate in my own goalball game. Thierry Henry is also a big reason to why I now support Arsenal along with the amazing team they had around him. Similarly, Usain Bolt’s ability to consistently perform on the big stage to beat off incredibly fierce competition is inspiring for me and he almost makes it look effortless. Henry and Bolt equally played a massive part in why I have always been involved in sport and physical activity.

I believe that they both had natural talent for their sports and demonstrated immense dedication to be the best. It was inspiring to watch how they could handle the pressure of competing in major finals or the Olympics and still come out on top! 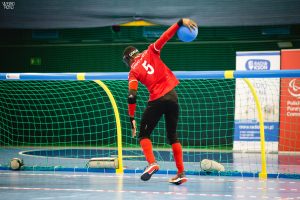 Has Thierry Henry and Usain Bolt’s success motivated you to excel on the goalball court?

100% it really has. To see where they gone to in their career and how they maintained their performance from teenagers to late in their careers is quite incredible. I keep track of what they do now since they have both retired from competing and it is great to see them succeed. For example, seeing Thierry Henry becoming an international football coach showed there are ways to demonstrate your skills and knowledge of your sport. All with the intention to support people who are just starting their journey. This inspired me to get into coaching at the South Yorkshire Goalball Club.