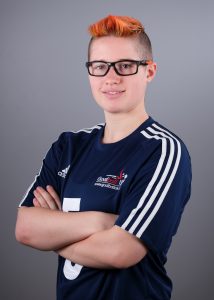 Ahead of nominations closing this Friday for the Goalball UK Player of the Season, we’re looking back at the 2018/19 winner of the coveted prize, Meme Robertson.

Last season was a real breakthrough campaign for Meme. Playing for Lancashire Lions and helping them to a third-place finish in the Intermediate A League, she claimed the prestigious honour of top female goal scorer, finding the back of the net 26 times. Meme also made her debut at the Elite level for RNC Hereford in this season.

As well as massively improving her goal scoring ability, Meme’s all-round game continued to develop significantly. From her powerful defensive attributes to becoming a real leader on and off the court, she demonstrated in 2018/19 that she has everything needed to be a top goalball player.

Meme’s performances did not go unnoticed by the Great Britain teams either, as she cemented her places in the junior and senior national sides. She was unable to collect the Player of the Season trophy in person as she was away with Great Britain in America, helping the side to a sixth-place finish at the IBSA Goalball International Qualifier in July.

The deadline for nominations for this year’s Player of the Season closes on Friday, so make sure you have selected the player that you want to see claim the prize.

This might be the top performing player in the league, but they may also have demonstrated different attributes that you feel deserves recognition. For instance, someone that has made significant improvement across the season, makes newcomers feel welcome at training or tournaments, helps set the standard on and off court or a player likely every coach would have in their team.

To nominate someone for this year’s Player of the Season Award, please CLICK HERE.