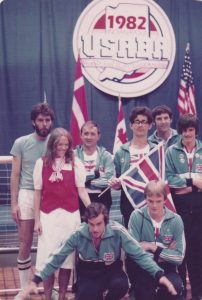 In 1980, Ivan was competing at the National Blind Swimming Championships at Stoke Mandeville. He met a couple of friends there who had recently started playing goalball in Nottingham. They told him all about the sport and he thought it sounded like great fun. So, just a few weeks later, a taster session led by the players from Nottingham took place in Norwich (where Ivan lived).

Ivan really enjoyed the session. He liked how energetic the sport was and thought that it suited his agility and strength. He therefore decided to set up his own team (Norwich) which started playing in tournaments against teams such as Nottingham and Milton Keynes.

Shortly after, he heard that players were being asked to put their name forward if they wished to be considered for the GB team who were going to be playing in the World Championships in the USA in 1982. He decided to and was delighted to not only be selected but also named as the ‘Team Captain’.

So, together with Andrew Apsey, Martin Brown, Robert (Bob) Matthews and John Wells – plus coaches Clive Spencer and Steve Dewhurst – they travelled to Indianapolis. The tournament took place at Butler University and the team finished in a credible 6th position (out of 12).

Ivan was then selected for the 1983 European Championships in Denmark. Back then games tended to be quite low scoring so, from a total of 6 games, GB only scored 4 goals but it was Ivan who scored all 4 of them! 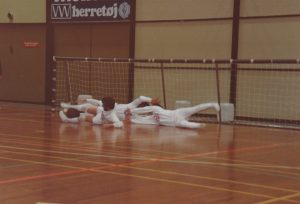 The next European Championships were in Poland in 1985. Ivan was part of this squad as well as for the 1986 World Championships in the Netherlands. This was the first time that GB entered a Men’s team and a Women’s team and Ivan recalls traveling there together by coach. Unlike now, when club teams are mixed and all games are played with a goalball weighing 1.25kg, men and women played separately – men with a heavier ball and women with a lighter ball.

By this time, there were many younger players emerging (especially from New College Worcester) so Ivan decided to retire. He kept playing for Norwich for a few more seasons though until he had an operation on his right eye which improved his sight slightly. He didn’t want to risk causing any damage so decided to stop playing. Although he has lost touch with most of his goalball friends, he has great memories of his playing days.

A lot of people in the current #GoalballFamily will know Louise Simpson as she still plays for South Yorkshire Goalball Club. What they probably don’t know is just how long she has been playing goalball for! Having represented Great Britain at 2 Paralympic Games, 2 World Championships, 1 World Games and 6 European Championships, as well as countless other European tournaments, she is one of our most experienced internationals.

Louise first played goalball at the age of 9 with the Leeds and District Sports and Social Club for the Blind and Partially Sighted. Shortly afterwards, she moved to New College Worcester and started playing on a regular basis in BBS tournaments.

In 2000, at the age of 16, she was the youngest member of the GB Women’s squad at the Paralympics in Sydney. They finished in 5th place following a heart-breaking, sudden death, extra throws defeat.

Unfortunately, the squad were then disbanded for a few years but, once they were re-established, Louise was immediately involved again and was selected for the European Championships in both 2005 and 2007.

Also in 2007, Louise was part of the GB squad that competed in the World Games in Brazil. This was a qualification tournament for the Beijing 2008 Paralympic Games and the team came agonisingly close to qualifying. Louise proudly remembers scoring 2 crucial goals in a 4-3 win against Finland – who were the reigning European Champions – that resulted in the team progressing to the quarter finals.

In 2009, at the next European Championships, Louise and the GB team were once again up against Finland – this time in the semi-final. They won 7-5 and then went on to beat Denmark 7-3 in the final so were crowned European Champions.

Louise competed in her second World Championships in 2010 in Sheffield. Although GB didn’t do as well as hoped, playing in front of a home crowd was a great experience. Next was the European Championships in 2011. Unfortunately, the team weren’t able to retain the title and had to nervously wait to hear if they would be able to play in the London 2012 Paralympic Games.

Following a silver medal at the Venice tournament in March 2012, Louise (and everyone connected with goalball in the UK) got the decision from the British Paralympic Association they had desperately been waiting for – GB would be playing and Louise was duly selected for her second Paralympic Games. 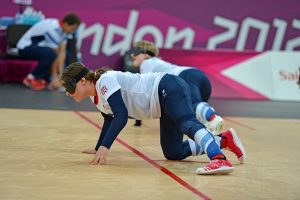 In her own words, London 2012 was “not a bad place to finish” her international career. Since then she has continued to play in the Goalball UK National League and although she is now more focused on running – she has completed a staggering 20 marathons! – she insists that she has no intention of retiring just yet so, who knows, she may make an international come back and add to an already very impressive list!