There are only 48 hours to go in 2021, which is crazy! Here is part 3 where we are looking back on July, August and September!

July began with the End of Season Awards with Tracy Compton (London Elephants) being named as Player of the Season and Cambridge Dons as Club of the Season, whilst Dave Potter was recognised for his efforts over the past 25 years with the Service to Sport award. Additionally, on #ThankYouDay, each Goalball UK staff member filmed a short message to express their gratitude to one particular member of the #GoalballFamily who had been especially supportive towards them over the past year.

With some clubs pausing for the summer holidays, and some still yet to return to training, Goalball UK filled the void for many in late July with a Summer Camp and a #FindTheNext Goalball Academy Camp literally running side by side at Nottingham Trent University. There was also a joint GB Women’s and Talent tournament at The Factory in Birmingham in early August followed by another #FindTheNext Goalball Academy Camp in late August.

A new Membership System and a new online Introduction to Officiating course were announced and a fantastic podcast series, telling 6 different goalball stories, was released by Adventures with Aggie.

Over in Japan the Tokyo Paralympics finally began, and referee Robert Avery was there representing Goalball UK.

We also celebrated the inaugural World Goalball Day and, of course, at long last, the return of competitive goalball with Matchday 1 of the Intermediate North League taking place in Sheffield on September 25th.

We caught up with Robert to find out about his time in Tokyo:

“Getting to Tokyo was quite stressful as lots of documentation was required and I was worried that I had missed something. I was originally due to fly via Abu Dhabi but then the UAE went on the Red List so my flight had to be re-booked and instead I went via Paris. At least the flight was only half full so I got to stretch out.

On arrival in Tokyo, we immediately had to go to the Testing Centre which was a long walk from the airport terminal. From then on, spitting through a straw into a tube became part of my morning routine!

We stayed in a hotel and there were strict restrictions as to where you could go – we couldn’t even go to the shop at the end of the street. We had an app on our phone that was permanently on, tracking our movements. Face coverings had to be worn everywhere, there were no exemptions, and often gloves as well. We also regularly had our temperature checked.

The food was OK. It’s amazing what you can eat with chopsticks! I actually got quite good at using them – so much so that it felt strange using a knife and fork again when I returned home!

It was about a 5 minute walk from our hotel to the venue which was absolutely massive. On the Saturday morning, some school children came in to spectate but most of the time there was no one there other than the participating teams – who tried their best to create a bit of an atmosphere – and the officials. It was very surreal. At least this meant that you didn’t have the challenge of trying to keep spectators quiet while the game was in play. 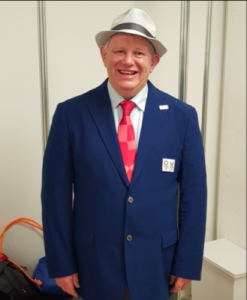 I was the Table Side Referee for the opening game. Considering this was my first ever Paralympics it was a real honour. It was a terrific feeling but equally I was scared! The attention to detail was really important. There are parts of the IBSA manual that you never read for Goalball UK competitions but here, you couldn’t miss anything. Things like making sure that the player’s uniforms were identical and there were no unauthorised logos.

Covid made it a different experience, but it was still fantastic. Looking ahead to 2022, I will be going to Lithuania in March to re-certify and then probably to Bruges. This was the 1st international tournament that I ever referred at so it is somewhere I always like to go to. I am also hoping to be selected for the World Championships in China in July.”

If you have enjoyed reading part 3, check back in tomorrow for our final edition where we reflect on October, November and December!