Back in July, at the Goalball UK End of Season Awards 2020/21, Dave Potter was announced as the recipient of the Keith Lound Service to Sport Award.

Dave attended the recent Intermediate Matchday in York and was presented with his award by Tom Dobson (Goalball UK Club and Competitions Officer). He gave a short, emotional speech to those who were present which he has now followed up with an open letter to the #GoalballFamily.

25 Years in Grassroots Goalball (from the horse’s mouth)

I’d like to thank everyone at Goalball UK for the Keith Lound Service to Sport Award. Keith was a great servant to goalball and it is truly an honour to receive the award bearing his name. When I retired from work in 2012 I thought that was the end of my involvement in goalball but I was encouraged to make a comeback and I’m glad I did. It feels slightly odd to accept an award for something you’ve done voluntarily and for fun but I am more than happy to do so. Nevertheless, all good things must come to an end and I feel that it is now time for me to finally call it a day. I’ve had a good run, got to know some wonderfully generous, caring people and have thoroughly enjoyed my 25 years in the game.
In 1995, at the age of 40, I decided on a career change and replied to an advert for a job in Rochdale as a Teacher of Mobility for the Visually Impaired. Although I had been a teacher for the best part of 20 years I had little knowledge of, and absolutely no experience in mobility or visual impairment, but as the job spec stated that full training would be given I thought I’d give it a shot. Somewhat surprisingly I was invited for interview and during this, just when I thought I was giving a fairly decent account of myself, up popped the inevitable $64,000 question….”Do you know anything about goalball?”
This threw me completely. I had done my homework as regards mobility but I knew nothing about goalball, in fact I had never even heard of it, so what could I say? I recognised that it was potentially a game-changing question and experience told me that it would have been extremely unwise to try and bluff my way through, so I replied, “No, but I can find out”.
The interviewing panel must have appreciated my response and liked what else I had said because they offered me the job. I duly accepted and then returned to work to see out the rest of my existing contract. A few days later and somewhat out of the blue, I received a phone call from my future employers asking if I would be prepared to accompany a group of youngsters to a goalball tournament in Leeds the following weekend as their usual escort was unavailable. What could I say? I had said at interview that I was prepared to find out about the sport and what better opportunity could there have been?

To cut a long story short my lasting memories of that day are that it was a novice tournament (known as ‘development’ in those days), there were twelve teams in attendance and the games lasted three minutes each way. I had absolutely no idea of the rules or what was going on, I didn’t know the youngsters or anyone else there so it was very much a case of being thrown in at the proverbial deep end. Unsurprisingly the Rochdale youngsters didn’t win a game but I was more that happy that they had enjoyed their day out and wanted to know when the next tournament was.
That was the start of my involvement in goalball and little was I to know that for the next 17 years I would be escorting Rochdale youngsters to tournaments far and wide. During this era these were stand-alone events hosted by the individual clubs with support from British Blind Sport, so one month you might be in London, the next in Newcastle! Over the next few years the Rochdale youngsters slowly improved, I learned the game and together we started picking off teams and winning a few medals. But it was not until 1998, some three years after our first outing, that the day came when, much to our surprise, and delight, we beat New College Worcester to win our first tournament.
In the early days Rochdale was a schools’ team but as the players aged and left school it was decided to break away from the LEA’s mantle and form an independent club. A three-person committee was elected, a constitution written and as for a name, it was decided to keep it simple – Rochdale Goalball Club. A fund-raising event held at a pub in Manchester made over £800, more than enough to start-up, and to keep the money coming in over the next few years the club applied for grants from Awards for All and The Community Foundation. I was elected as club chairman and chief coach and gradually became more and more involved in the sport.
I was nominated for the British Blind Sport Goalball Sub-Committee and subsequently became Tournament Manager and Vice-Chairman during Keith Lound’s tenure as Chairman. I had the honour to receive the Roger Clifton Award for Services to Goalball and served on the Domestic Advisory Committee alongside Colin Baxter and Mike Reilly during the early days of BBS Goalball’s evolution into Goalball UK. I also qualified as a referee but soon found out that it wasn’t really my forte!
At this time there were only two sections in Goalball, development (now novice) and experienced (now elite). Realising that there was a gap in provision for players that were too strong for development but not yet ready for experienced, I pushed for a third level, now known as intermediate, to be considered by the BBS Goalball committee. After much planning, discussion and deliberation, it was eventually included for the 2006-7 season with the Rochdale tournament being selected as the trial event for the new level. It proved to be an instant success and has been included ever since.
Rochdale Goalball Club in its various guises existed for 17 years, moving from novice to intermediate and eventually onto elite. The players started training regularly and were reasonably successful, winning a number of tournaments including the prestigious John Oakley Memorial, the Mercer Shield and the British Goalball Shield. Three players caught the eye of the international coaches and went on to represent Great Britain. To encourage social interaction, keep the players motivated and to try and attract new talent, a sister club the Rochdale VIpers Tenpin Bowling Club was formed and competed in the BBS Tenpin League. Dwindling numbers meant that Rochdale Goalball Club was forced to call it a day in 2012, its final fling being to win the inaugural Goalball UK National Intermediate League. As for me, I retired from work, relocated to North Yorkshire and looked forward to a well-earned rest – or so I thought!
Three months or so into retirement I received a phone call from Colin Baxter of the Hull Outreach Goalball Club saying that he had three lads from Scarborough on his books, but that it was a long way for them to travel to train and asking did I fancy trying to set up something for them nearer home? With his help and in conjunction with the lads’ parents we arranged a few training sessions in a local school sports hall and in 2013 the Scarborough Panthers Goalball Club was born.
The Club had an immediate and meteoric rise to glory. The players and their parents’ enthusiasm was infectious and everyone worked extremely hard to forward the club. The travelling support at training sessions and tournaments was hugely motivating and this, alongside the player’s determination, attitude and talent resulted in a medal haul that was second to none at the levels at which they competed – sixteen tournament wins and two National titles over a seven year period.

Scarborough is very much a family club and like other clubs with a small catchment it has, and always will struggle to attract new talent. That is not to say it has ever been short on quality, it has plenty of that and is extremely proud to boast that it has developed two players of international standing from amongst its membership. Not too shabby for a little club from the sticks!
Thank you all once again.
Dave Potter 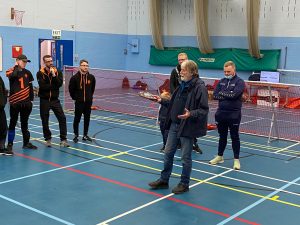