The season was in full swing in the final 3 months of 2021 with Novice, Intermediate North, Intermediate South and Elite competitions taking place around the country. During October half term, there were also Junior Days in Croydon and Bradford as well as another #FindTheNextGoalball Academy Camp in Birmingham.

The GB Women were in Madrid in October for a tournament, coming home with a silver medal, before travelling to Turkey in November for the European Championships. The team finished in 6th place, securing their place in the A League. This included an amazing 3-2 win against reigning Paralympic champions Turkey. 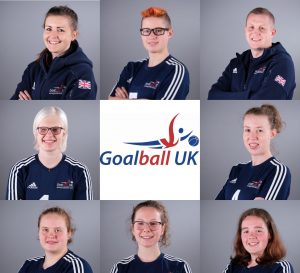 December, as always, means festive fun and this year it came in the shape of the Goalball UK ‘Christmas Choir’ with their goalball themed rendition of ‘The 12 Days of Christmas’. There was also the ‘Jingle Balls’ Christmas Quiz.

We caught up with the GB Women’s coaches, Aaron and Becky, and asked them:

Aaron: “It was great to be back competing with the squad and watching the athletes enjoy playing the game they train so hard for. Due to Covid-19 there were understandably some differences and testing processes that we had to go through. These can be stressful but are ultimately in place to keep everyone safe and ensure athletes can compete which is what we all want. We really enjoyed the competition and playing as part of a team. It was also good to see other teams (athletes/coaches) and officials as we haven’t been able to since 2019.

The highlight for me was watching the athletes do what they love doing, both in terms of on court play but also the friendships and laughter that we are well known for off court. The athletes are on a journey together and to watch them all back together having fun and gaining new experiences and skills through their involvement in the program is really pleasing to see. Alongside this, our performance against current Paralympic Gold medallists Turkey was also up there as a highlight of the competition. 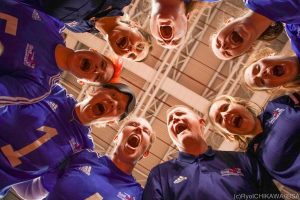 We have our next 12 months of training and competition planned and will use the time to reflect on the recent Euros and work on identified areas for development. We aim to be best prepared and hit the ground running for both qualification events in 2023.”

Becky: “It was fantastic to be back out on the goalball court and doing what we all love again! There was a lot of stress and anxieties in the run up to the first game around covid and protocols but as soon as the first whistle blew for the first game that eased and we could really enjoy the competition. It was also great to see the other international teams compete and see familiar faces after 2 years!

There were many highs and few lows during the competition, to actually be there and competing was a particular highlight for us all considering when the competition was announced a few weeks before it was going ahead, Turkey was on the travel red list, and we weren’t confident that we were going to be able to attend! From our point of view, it was a highlight to see the girls compete in an international competition again and perform at the high levels we know they can, with that in mind, the performance against Turkey in the group stages was a particular highlight!

We are currently in our rest and reflections period of the programme; this is an important stage as we all reflect on this year and identify key areas for development as a squad and help us plan what we need to work on at our upcoming training camps and competitions to hit the ground running in 2023. We are planning for 2022 to get the right balance of training and competition opportunities and hopefully will be back competing internationally in the spring.”

We also caught up with Faye to find out about the plans for the GB Men, the Talent Squad and the #FindTheNext Goalball Academy:

“The GB Men will be heading to Lithuania in March for the Trakai Competition. We will also hopefully be able to enter some other international tournaments as we continue to train for the next European B Championships (Date and Venue TBC).

New Talent Squads will be announced in April/May with the intention being to take 1 female and 1 male team to the European Para Youth Games (U19’s) in June/July. These will be hosted once again in Pajulahti in Finland.

With the #FindTheNext Goalball Academy, we are excited to continue the great work achieved so far with our upcoming training camps. We also have some exciting news to share in the early months of 2022!

Happy New Year Goalball Family, we cannot wait for the year ahead!